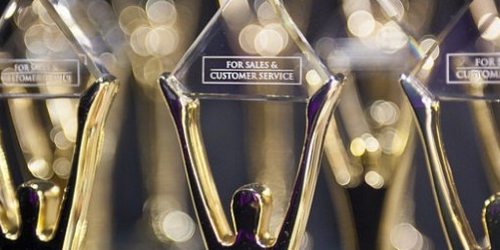 After taking home six Stevie Awards in 2016, MTM is proud to announce that we have qualified as a finalist for three 2017 Stevie® Awards for Sales & Customer Service. Ultimately, we will be named a Gold, Silver, or Bronze award winner in each of the three categories during a gala banquet on Friday, February 24 at Caesars Palace in Las Vegas, Nevada.

More than 2,300 nominations from organizations of all sizes and in virtually every industry were evaluated in this year’s competition, an increase of 10% over 2016. Members of seven specialized judging committees will determine the Gold, Silver, and Bronze placements from among the finalists during final judging.

Congratulations to the individual MTM employees and teams who worked tirelessly this year to achieve their goals and qualify in finalist positions:

“This year’s first-round judges were treated to many inspiring stories of sales, customer service, and business development success around the world,” said Michael Gallagher, president and founder of the Stevie Awards. “The final judges will have a tough task to determine the Gold, Silver, and Bronze placements from among the finalists.”

Click here for more details about the Stevie Awards for Sales & Customer Service and to view a full list of finalists in all categories.

The People’s Choice Stevie Awards are Up to YOU – Vote Now!

MTM has also been included in voting for the 2017 People’s Choice Stevie Awards for Favorite Customer Service. We need your vote to win! To cast your vote for MTM as many days or as you can, enter short code Y288H here.