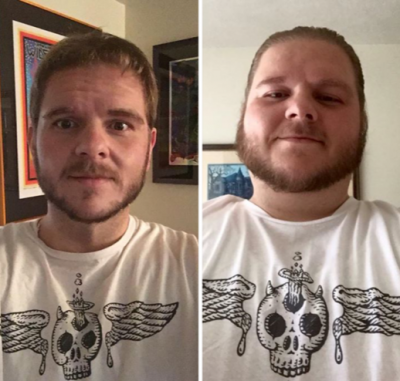 MTM takes the health and wellness of our employees seriously. Our Wellness program and initiatives have changed the lives of many–including James Perkins, a Contact Center Supervisor in our Pulaski, Virginia office. In 2017, James took his health into his own hands, working hard on his physical fitness using the treadmills and gym equipment provided to staff within our locations–and his results are obvious to everyone around him. Just check out his amazing before and after picture! 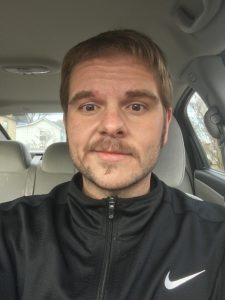 From Christmas 2016 through the end of 2017, James lost an incredible 183 pounds. James says he wants his story to be heard because he wants to help others better themselves. “There are so many men and women out there who are at the point I was, who are completely hopeless and don’t think they can lose weight and get their lives back. I want my story to be heard so that it can possibly motivate even just one person to get up and turn their life around,” James says.

So, in his own words, here is how James accomplished his weight loss and physical fitness goals and made positive changes to his life.

“All my life I have always been big. Growing up, I was the fat kid of the group. I was teased quite a bit, and that really affected me negatively. Food was my escape. It gave me this happiness that I was lacking in my life. I was lazy and just became bigger and bigger and bigger. I was content not doing anything about it, and my eating habits were horrible. I ate nothing but junk, and I ate it whenever I wanted to. Not even the birth of my daughter in March 2012 was enough to warrant a change in my behavior.

Fast forward to Christmas 2016. My siblings wanted to have pictures taken of our families together as a gift to our parents. On Christmas morning when the first frame was opened, I could tell how much my parents appreciated this gift. However, I could also tell that they were concerned about my weight. I didn’t even know how much I weighed at that moment. I had not seen a doctor in years because I had already convinced myself that there wasn’t any need for me to hear them tell me what I already knew: that I was morbidly obese, diabetic, and had high blood pressure. Basically, I knew I had every possible problem and disease that came from being as fat as I was. Beyond that, I was sure that I had probably suffered a heart attack a few years back, and I had been hiding that I was having fairly regular chest pains. But, on this Christmas morning, I decided to step on the scale in the master bathroom in my parents’ home for the first time since I could remember. I was shocked to see that I weighed 413 pounds. I decided right then and there that I needed to do something about this. Sadly, I found excuse after excuse to put it off and be lazy.

Then in late January 2017, I fell two times and ended up with a broken foot. I went to the urgent care, where I was ultimately fitted with a boot and was told to follow up with my PCP. The problem was that I didn’t have a PCP. So, my mother told me about this doctor who did rounds with her at her workplace, and my fiancé’s aunt told me to come see the doctor that she worked for as a nurse. Well, these doctors turned out to be the same person. I saw him for the first time on a Monday. He told me that the foot would heal without surgery, but he wanted me to have some blood work done. He told me to come back that Friday and he’d have the results. Friday rolls around and the doctor comes in and tells me how he know from the moment he first saw me that I had all of the issues that a severely morbidly obese man would have—a fatty liver, diabetes, heart disease, etc. But then he handed me the lab results—a point in time where my life changed forever—and said, “but you are clear for everything I checked for.” He continued to talk and I couldn’t hear anything he was saying, I couldn’t believe what I had heard. It shook me to my core. After the longest minute of my life, I shook my head and interrupted the doctor mid-sentence to ask him what were the chances that my labs would have come back like that. He looked me dead in my eyes and said, “Five, maybe ten percent max. Somebody is watching over you.”

At that point he asked me if I wanted to lose this weight and I told him I would do whatever it took. As I was recovering from the foot injury, the first thing we focused on was my diet. I went from eating burgers and pizza to eating grilled chicken, salads, and other healthy foods. Over the first six weeks, I stayed on the diet and managed to eliminate processed foods, sodas, red meat, and alcohol. I quickly learned that while the diet helped, if this was going to work, I was going to have to make other changes as well. After a few months of dieting, I lost more than 40 pounds. That was exciting, but I wanted more out of the experience. With my foot healed, I decided to drive to the track near my house. I walked one mile. It was the hardest 26 minute mile I’d ever walked. The next day, I went back and beat my time from the day before. By the end of that week, I was ready to commit to making this an everyday thing. I would get off of work at 7 a.m. and be on the track by 7:45. I was able to push myself to do more than one mile. I was setting goals to measure my success by, and by the time April came around, I was walking five miles a day and my weight was down to 347 pounds.

I started to grow tired of the track near my house, and decided to start using the MTM treadmills. It was cool because I could adjust my speed and push myself harder than I could at the track. Instead of just walking, I started RUNNING. I will never forget when I ran a full mile without walking for the first time. I just kept pushing myself and started doing different exercises and increasing the intensity. Now, I run four to five miles five days a week.

I am in the best shape of my life, and I did it by working and committing myself to the process. I trusted that the results would come, and they did. The changes that I’ve made are now part of my daily routine, from the things I eat, to the way I exercise, to the way I now live my life. People have asked me why I just didn’t have gastric bypass surgery and just be done with it. That answer is easy for me: had I taken that route, I would have never been able to learn the lessons about work ethic, about pushing myself to my limits, learning how to eat healthy, learning that I wanted to live more than I wanted to die, and so much more.

Congratulations James—this is truly an amazing accomplishment! We can’t wait to hear what you achieve next!