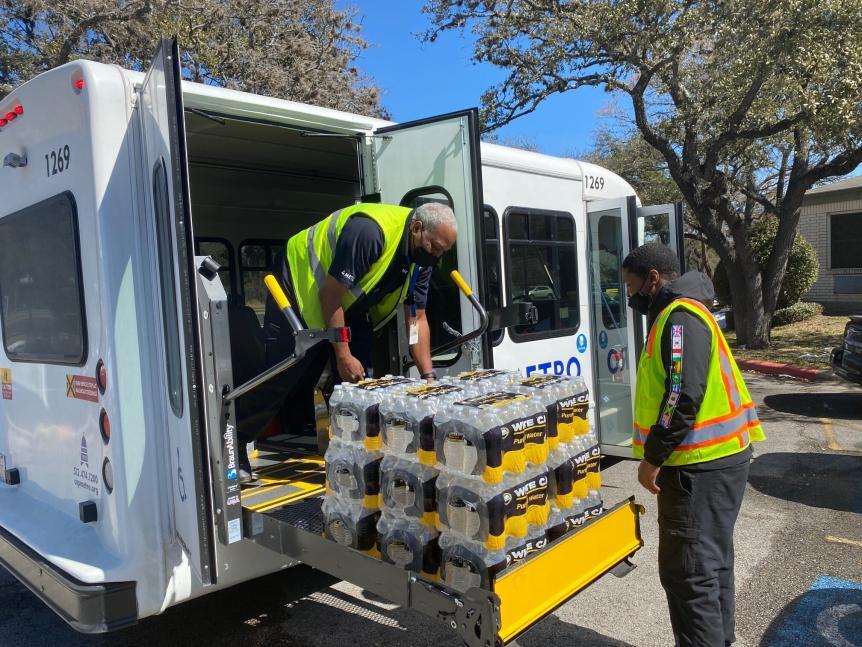 Throughout the state of Texas, millions of residents faced lack of electricity, heat, and water in their homes in the wake of severe winter storms and freezing temperatures last month. Even as power and water slowly returned, many continued to deal with skyrocketing electric bills, remedy frozen and burst pipes that caused damage to their homes, and face a shortage of water resources.

In Austin, where MTM Transit partners with Capital Metro to deliver MetroAccess Americans with Disabilities Act (ADA) paratransit services, our team hasn’t faltered in helping their community recover. Austin faced unprecedented shut downs, power grid failures, and catastrophic damage from frozen and burst water pipes after the storm ravaged the city. Just when it couldn’t get any worse, it did—water pumping stations failed due to a lack of electricity and freezing pipes, causing a city of more than two million to go without drinking water. For our local team, the situation has been a call to action as they showcase our core values to their community.

In partnership with the City of Austin and Capital Metro, our team–many of whom were without power and drinking water themselves–stepped up to meet the needs of their community. Despite power outages at our North Base facility and burst water pipes at our South Base facility, here are just a few of the ways our Austin team served their community during a time of crisis:

We are incredibly proud of our service-minded teammates who didn’t hesitate to step up to the plate even as they faced adversity themselves. Thank you for taking care of each other and your community!